British Columbia is the most western province of Canada. It is between the Pacific Ocean and the Rocky Mountains and has a diverse geography. It shares a border with the province of Alberta to the east and Yukon and Northwest Territories to the north.

The population of British Columbia, in 2021, was 5.2 million, and it is the third most populated province in Canada. The largest city in British Columbia is Vancouver and the capital of the province is Victoria.

There are many great cities in British Columbia, all with their own characteristics and a high standard of living across the board. With so much choice, it can be challenging to choose which places are the best to live in British Columbia.

Because there are so many great cities dotted around the province, how to choose the best places to live? In this article, we list ten great cities to live in British Columbia based on various criteria including living standards, average incomes, recreational opportunities and the environment. 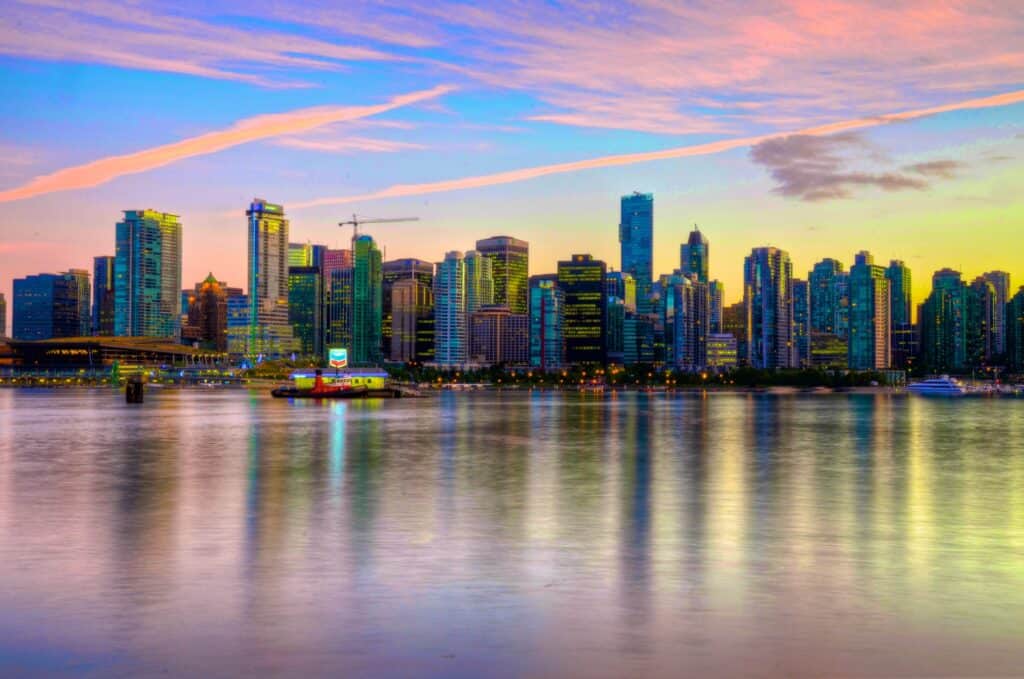 Vancouver is a beautiful city that encapsulates what British Columbia is all about. The city has some of the most spectacular scenery you will find in Canada and it is an excellent choice for nature and culture lovers alike. It is the biggest city in British Columbia, with approximately 631,000 people living in Vancouver. The Greater Vancouver area has a population of 2.6 million and it is the third-largest metropolitan area in Canada.

The city has many cultural and historical attractions, so it is easy to try something new every day. There is a vibrant downtown with all the amenities you could wish for, including great restaurants and shopping, architecture and museums, theatres and parks.

The downside to living in Vancouver is that it is quite an expensive city. However, the average incomes are high, so it balances out the higher cost of living. There are plenty of job opportunities in the city and the unemployment rate is only 3.6% which is below both the national and the province averages.

If you are looking for a place to live with plenty of sunshine, then Kelowna is a great option. The area receives over 2,000 hours of sunshine per year and has some of the best weather in Canada.

It is also a thriving city with excellent public services. There is a transport system that gets you around the city and connects you to other places in and beyond the province. Kelowna has an excellent health care system and great educational institutions. It is a smaller city with about 34,000 people calling Kelowna home. Its size means that the city is peaceful and calm, yet it still has a good range of amenities.

Kelowna is a safe city. The crime rate is lower than the province’s average. The cost of real estate and the cost of living are also below average for the province. Residents of Kelowna benefit from easy access to many beautiful parks with many hiking trails. You can also visit local wineries of try local cuisine in the various restaurants in town. 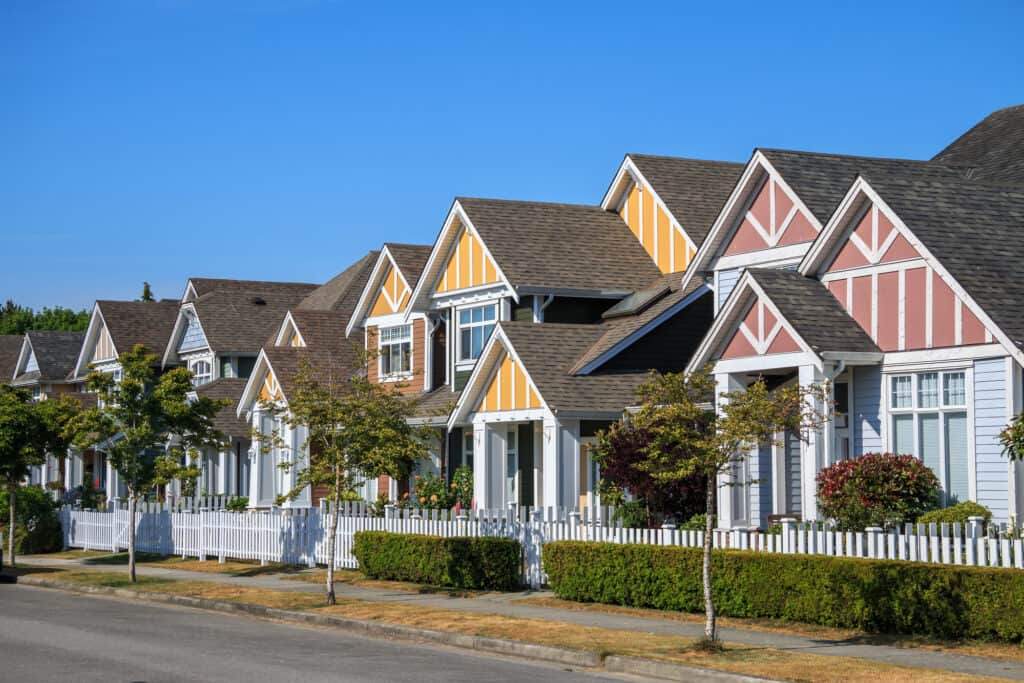 With over 200,000 people, Richmond is one of the most populated cities in British Columbia. It is situated to the southwest of Vancouver and is home to Canada’s second busiest airport, Vancouver International.

The city has an excellent health care provision with several major hospitals. It also has a high-quality public transport system, making it easy to get around without a car. There are plenty of recreational opportunities both within the city and its proximity, including hiking and biking trails. Richmond is great for culture, too with many museums and galleries to explore.

Penticton is located one hour south of Vancouver. It has its own airport with direct flight to for example, Toronto, Montreal and Calgary. Just like Kelowna, Penticton is another sunshine city with 2,000 hours of sunshine per year and because of its southerly location, the temperatures rarely drop below freezing even in mid-winter.

There is a thriving downtown with plenty of cafes and restaurants as well as great shopping opportunities. Arts and culture are strongly present in Penticton with many cafes and bistros exhibiting local art. People who enjoy the beach life and want to make the most of all those sunshine hours, can head to Skaha Beach, which has been named as one of the ten best beaches by the National Geographic Traveler Magazine.

There are good job opportunities in Penticton, and while the city has agricultural and winery background, there are many diverse and imaginative new businesses offering employment opportunities. These include both start-ups and companies that have relocated to Penticton. 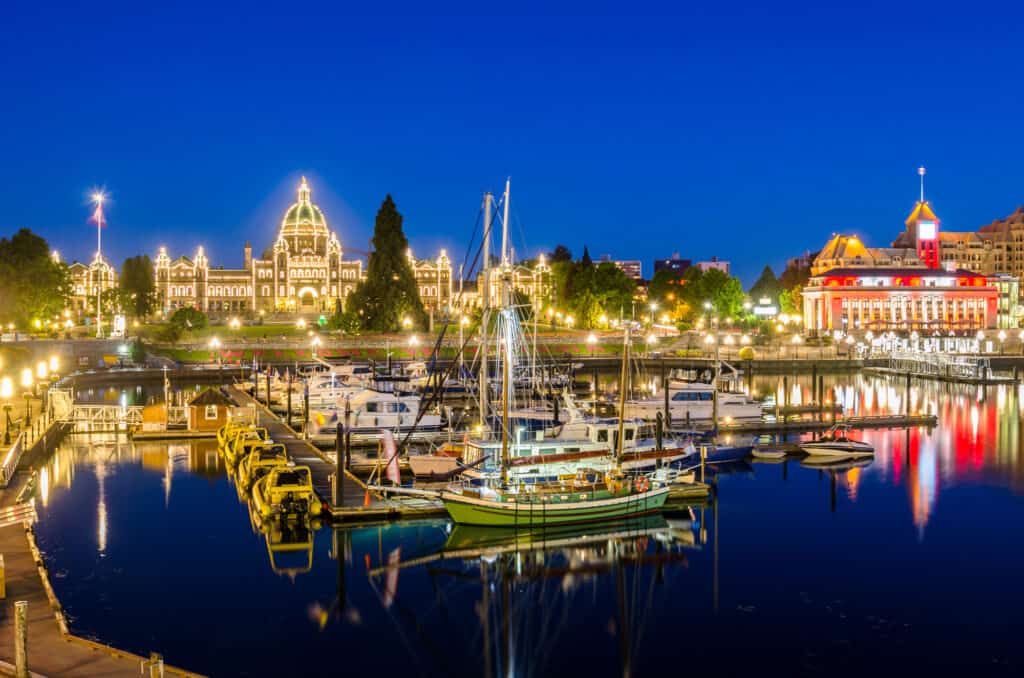 Victoria is the capital of British Columbia and one of the oldest settlements on Canadian soil. This city of just over 100,000 residents is rich in culture and history. It has a temperate climate and less rain than Vancouver. The city also benefits from its own international airport. Victoria is known as ”The Garden City” and boasts of flowers that bloom all year round.

Residents of Victoria enjoy a high standard of living and some of the lowest property taxes in the whole country. There are plenty of employment opportunities in government offices, business and technology. The employers in the area also offer competitive wages, which contribute to the high standard of living.

Victoria has fantastic education standards and facilities. The public schools in the area are excellent and several private schools offer additional options. Residents in the city are highly educated with around 72% having at least some tertiary level education.

Langford is situated on the southern Vancouver Island and is one of the fastest growing cities in British Columbia. It is surrounded by nature yet has all the every day conveniences you might need. Currently, Langford is home to about 40,000 people who enjoy living costs 21% lower than the province’s average.

This vibrant and growing city has a low unemployment rate as well as a low crime rate which is 28% below the average for British Columbia. Its real estate prices are below the average, too, making it a very attractive place to buy property.

The residents of Langford can shop at farmers’ markets and enjoy festivals, water activities and support local sports teams. While Langford is growing rapidly, it still retains a small-town feel, and the city takes care to preserve as much green space as possible within its plans for expansion. 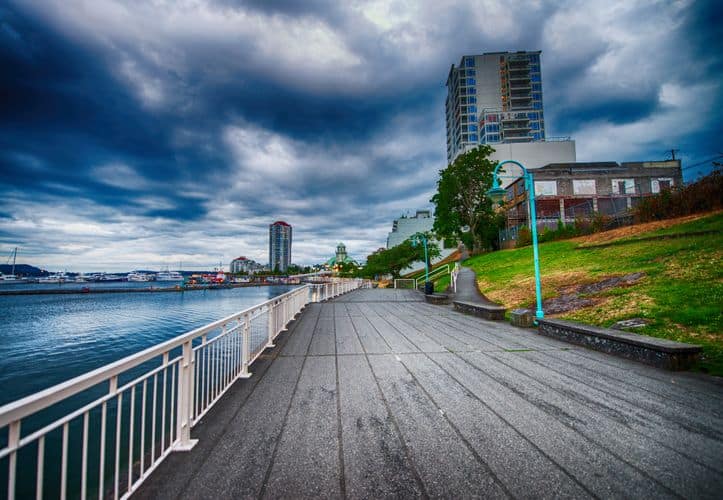 Nanaimo is a coastal city on the east coast of Vancouver Island. It has a population of around 90,000 and is a popular location to settle for people of all ages. Nanaimo has been recognized as one of the most desirable places to live in on both national and international lists.

There is a healthy job market in Nanaimo with opportunities in, for example, retail, accounting and real estate, which makes the city attractive to job seekers. It is also popular with retirees and families because it has an affordable housing market and excellent schools. Vancouver Island University is a popular choice among both local and international students.

Nanaimo’s residents can enjoy a range of community activities which range from arts to entertainment and politics to sports. The city has plenty of shops and restaurants and some unique historical real estate.

Despite its moody name, Port Moody is a great place to live. It is located close to Vancouver which makes it popular among those who wish to work, but not live in the bigger city. Port Moody is home to 33,500 people who enjoy the benefits of living in a smaller community.

The city has one of the best waterfronts in Vancouver and homes here are sought after, resulting in higher than average house prices. However, the living costs in the city are 6% lower than the British Columbian average, balancing the finances out a little.

The area has beautiful natural scenery, and there are many trails to explore in the area. The city also has four of its own breweries, so if you enjoy craft beer, you are in the right place. You can take a walk along Brewers Row and stop at each of the breweries to sample their produce. 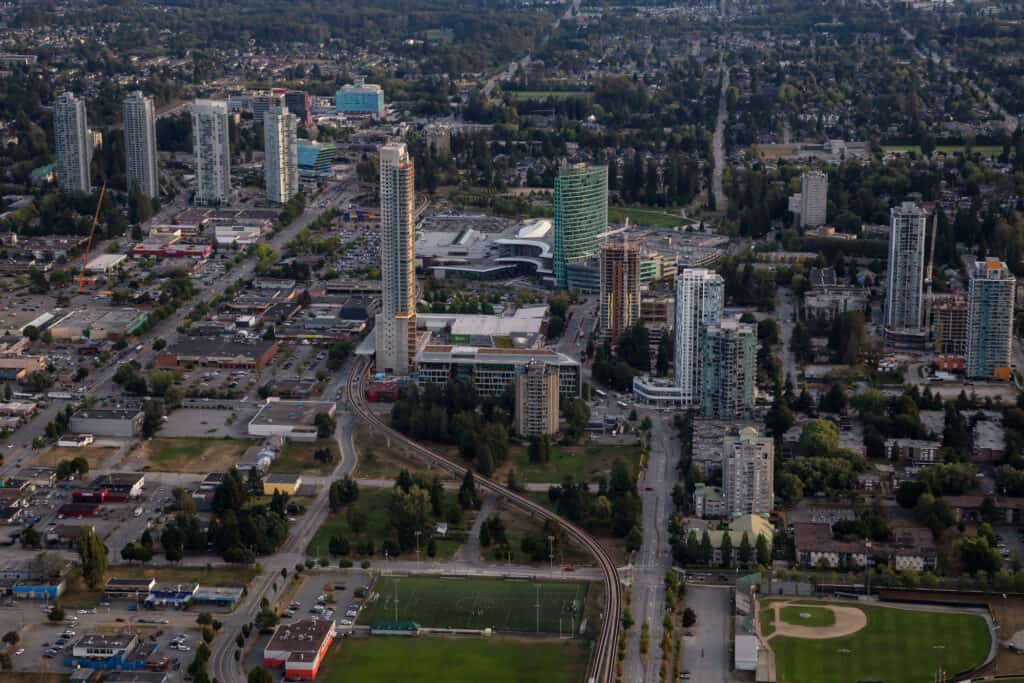 Surrey is the second biggest city in British Columbia, with just over 568,000 residents. It is a diverse city and is home to many people of Asian and Indian origin. It is another British Columbian city that is growing, yet still has an affordable housing market.

The city has a healthy job market of its own, but also benefits from its proximity to Vancouver with plenty more employment options. You can catch the Skytrain from Surrey’s Gateway Station and be in Vancouver downtown in about 35 minutes.

Being such a large city, Surrey has multiple shopping malls, community centres, hospitals and public parks. There has been significant investment into building new homes and resources to accommodate new residents. The city has also developed into a hub of higher education with many universities having branches in Surrey.

Unlike many of the other cities on this list, Kamloops is located inland, within the Thompson-Nicola Regional District. With a population of just over 90,000, it is the second-largest interior city in British Columbia. Because of its inland location, the weather in Kamloops is very different from the coastal cities in British Columbia. The weather can get quite extreme, with scorching summers and freezing winters.

Kamloops is great for families with school-aged children with the approximately 15,000 students in Kamloops receiving a high standard of education at the region’s public schools. And those looking for a private alternative also have plenty to choose from with both English and French language private schools in the city.

The city has an active social and cultural scene with plenty of choice for all tastes. Kamloops hosts many community events every year and is known as ”the tournament capital of Canada”. One of the better known festivals in the city is the Kamloops Film Festival, which is a ten-day festival held in March and celebrates both local and national films.

So there you have it, our list of the best places to live in British Columbia. If you are considering moving to British Columbia, these cities are a good starting point. However, there are plenty more options within the province, so the best thing to do is to travel around the province, get to know the places and find your own favourite.