The cost of living in Canada is quite high compared to some other western countries, but you could say it is the price you have to pay for a high standard of living. Most places in Canada offer their residents good schools, healthcare, education and employment opportunities as well as safe communities.

House prices in Canada have been steadily rising for several years now, but it is still possible to find places with reasonably priced property combined with low living costs.

Generally speaking, the west coast and the Prairie Provinces are more expensive whereas the cheaper options are found in Quebec and Ontario. Large cities are often, though not always as the table below shows, more expensive to live in than smaller cities.

When considering cheap places to live in, we need to look at a range of factors besides the cost of buying a home. We also need to look at the average income in the area. How affordable a place is to live in also depends on the region’s taxes and the cost of amenities such as petrol, electricity and groceries.

In Canada, different territories and provinces set their own taxes. The price of petrol, electricity and groceries can vary a lot, too. Having to pay for public transport can also add to the cost of day to day living.

So what are the cheapest places to live in Canada considering the variety of parameters?

It is interesting to note that though places like Kitchener and London have a lot more expensive homes than the other cities on the list, they are still among the cheapest places to live in Canada. This is because the taxes and the cost of day-to-day items are cheaper in the area.

Note on salary range: the range is always from the lowest average to the highest average. The actual lowest/highest salaries may be lower/higher.

Sherbrooke in southern Quebec is the cheapest city to live in. Interestingly, the average salary compared to living costs is quite high and better than Red Deer, Moncton and London, all of which have higher average living costs both for single individuals and for a family of four. The salaries range from (all comparisons from salaryexplorer.com) 25,100 to 443,000 so depending where you are on the salary range, you could be living very comfortably or counting the pennies.

The biggest employer in Sherbrooke is the local university. About 11,000 of the city’s 176,162 residents work as professors, teachers or researchers at the university. The city is well connected to the rest of Canada by major railways and highways. Sherbrooke hosts many festivals and events throughout the year and there are art galleries and museums to explore. The region has many lakes, rivers and mountains, making it an ideal location for outdoor lovers. Sherbrooke even has a ski hill within the city and there are hundreds of mountain trails within thirty minutes of the city.

Red Deer is located roughly halfway between Edmonton and Calgary. Most of the city’s residents live in the urban areas of the city. Sadly, the city has a high crime index. It’s CSI (crime severity index which is assigned based on the seriousness of crimes) is 165.6 compared to 73.44 for the country as a whole.

Red Deer is home to 103,588 people. Many of the people living in Red Deer work in the oil industry, agriculture and cattle farming, and the area is a centre of petrochemical production. The average salary in Red Deer is only 94,500 and ranges from 23,900 to 422,000. The average cost of a family home is the lowest on the list. The high crime rate might explain the low average house price.

However, Red Deer is regarded as one of the most entrepreneurial cities in Canada and provides opportunities for new businesses from grass roots to expansion. Red Deer is a city with plenty of outdoor activities to choose from. There are trails along the river and its tributaries. The city also has great community parks as well as 300 acres of boardwalks, gardens and pathways. 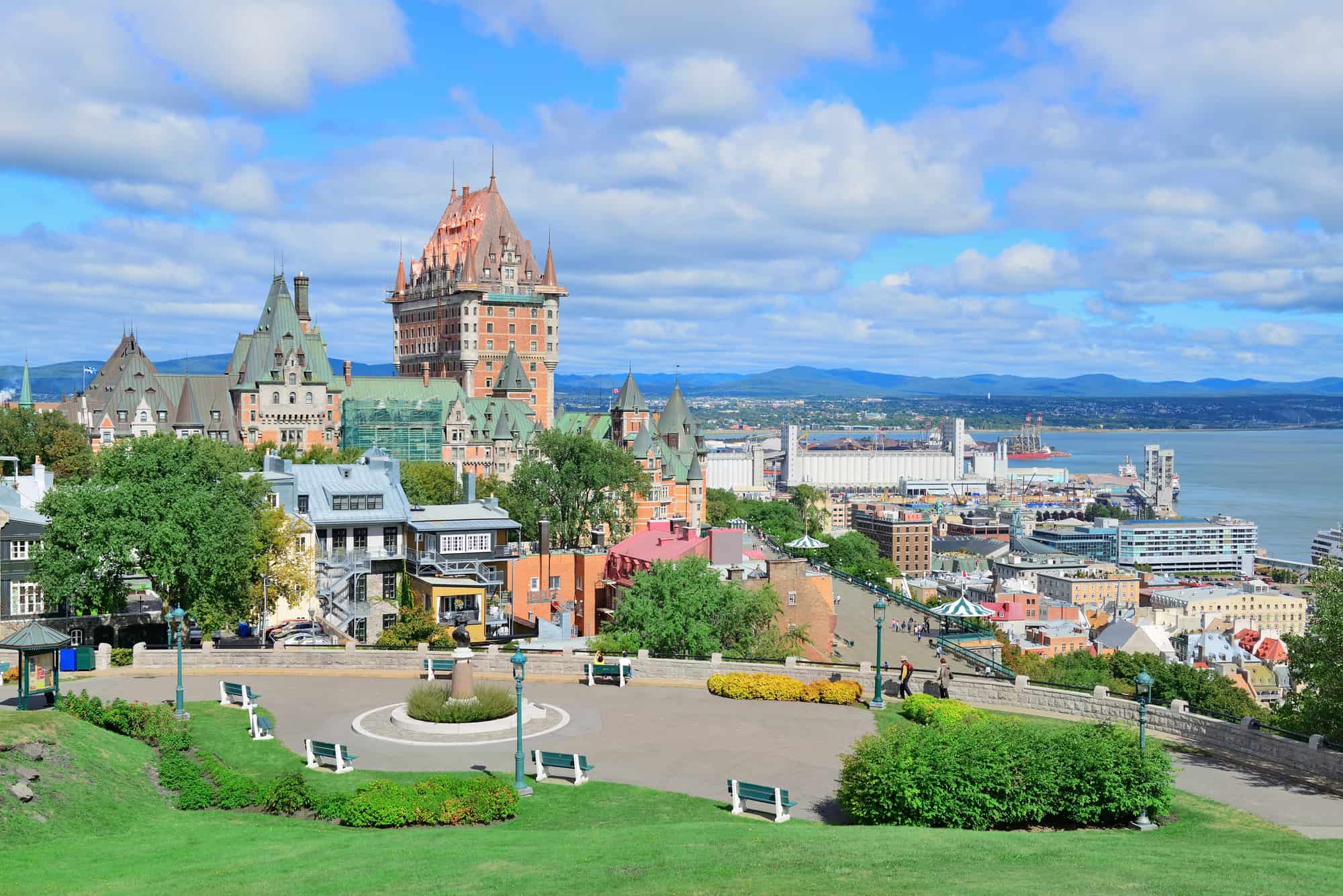 Quebec City is the capital of Quebec, with a population of 542, 298. It is rated as one of the safest cities in Canada and offers an excellent quality of life for its residents. The average salary in Quebec City is 126,000, but the cost of living is still very low both for singles and families. The salaries range from 31,900 at the lower end to 562,000 for the top earners.

Many of Quebec City’s residents find work in public administration, the defence industry, and tourism. The city has a European feel and is full of history with some interesting sites dating back hundreds of years. The oldest part of the city is one of UNESCO’s world heritage sites.

Quebec City is a very safe place to live in with one of the lowest crime rates in North America. The city is offers something for everyone, whether young or old, living the single or family life with festivals and events taking place in the city all year round. 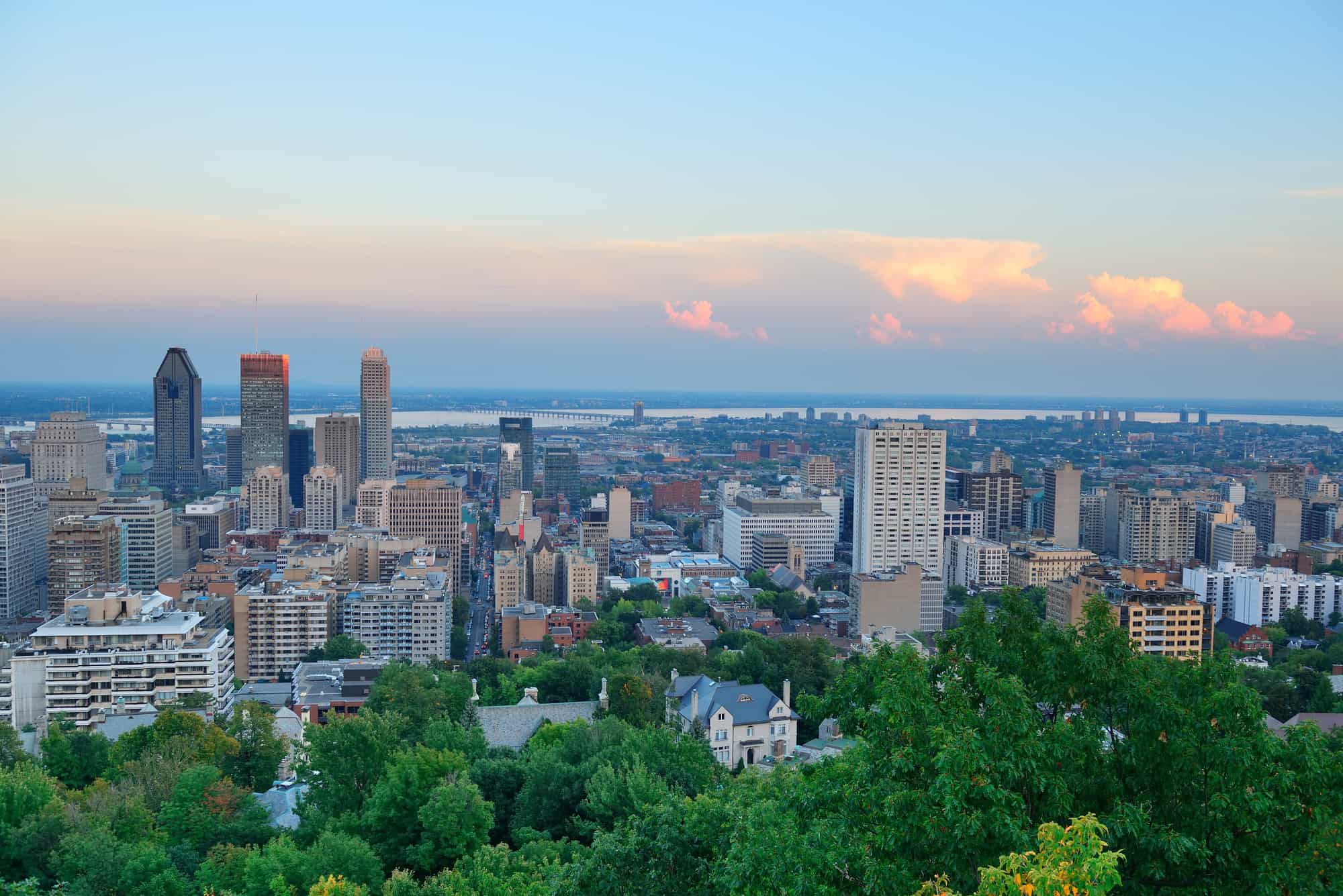 Montreal is the largest city in Quebec, with a population of 1.78 million. Many people in Montreal have European roots and the city has a very European feel. The city has the second largest economy in Canada and the Bank of Montreal and Royal Bank of Canada both have their headquarters in Montreal.

For such a large city, Montreal really is astonishingly cheap. The average family house costs only 580,000 and the average salary is 134,000. The range of salaries is from 34,000 to 600,000. Major employers in the city include manufactures of electronic goods, pharmaceutical companies and the aerospace industry.

Montreal is ranked among the world’s most livable cities as well as one of the happiest locations. The city attracts around 45,000 immigrants each year, making it a very multicultural and diverse place to live in. Montreal has an excellent culture and nightlife scene and a lot of options for recreational activities. It is home to several world-renowned galleries and exhibitions. There are also plenty of recreational options and outdoor spaces to enjoy. 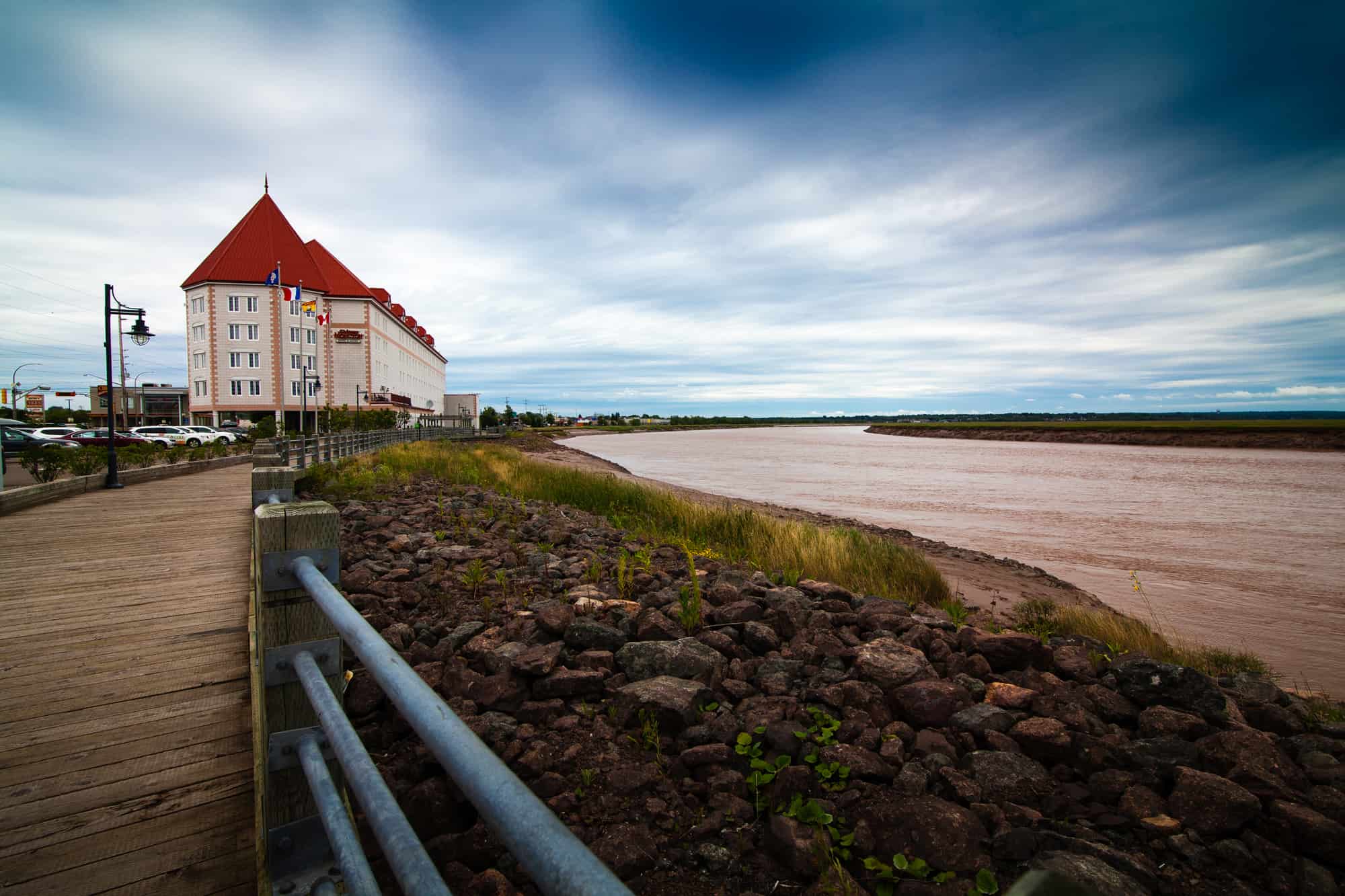 Moncton, a vibrant maritime city, is the largest urban centre in New Brunswick, with a population of 85,198. Moncton’s economy has been devastated twice in the past. First in the 1860s, with the collapse of the shipbuilding industry and then with the closing of the CNR locomotive shops in the 1980s. But each time it has bounced back and today many of the residents find employment in the wholesale, retail and tourism sectors.

Moncton has a vibrant arts and entertainment scene and many sports and recreation options to choose from. It is a multicultural city and wherever you are in Moncton, you are never far away from beautiful beaches and breathtaking natural landscapes making it an ideal city for all who enjoy spending time outdoors. 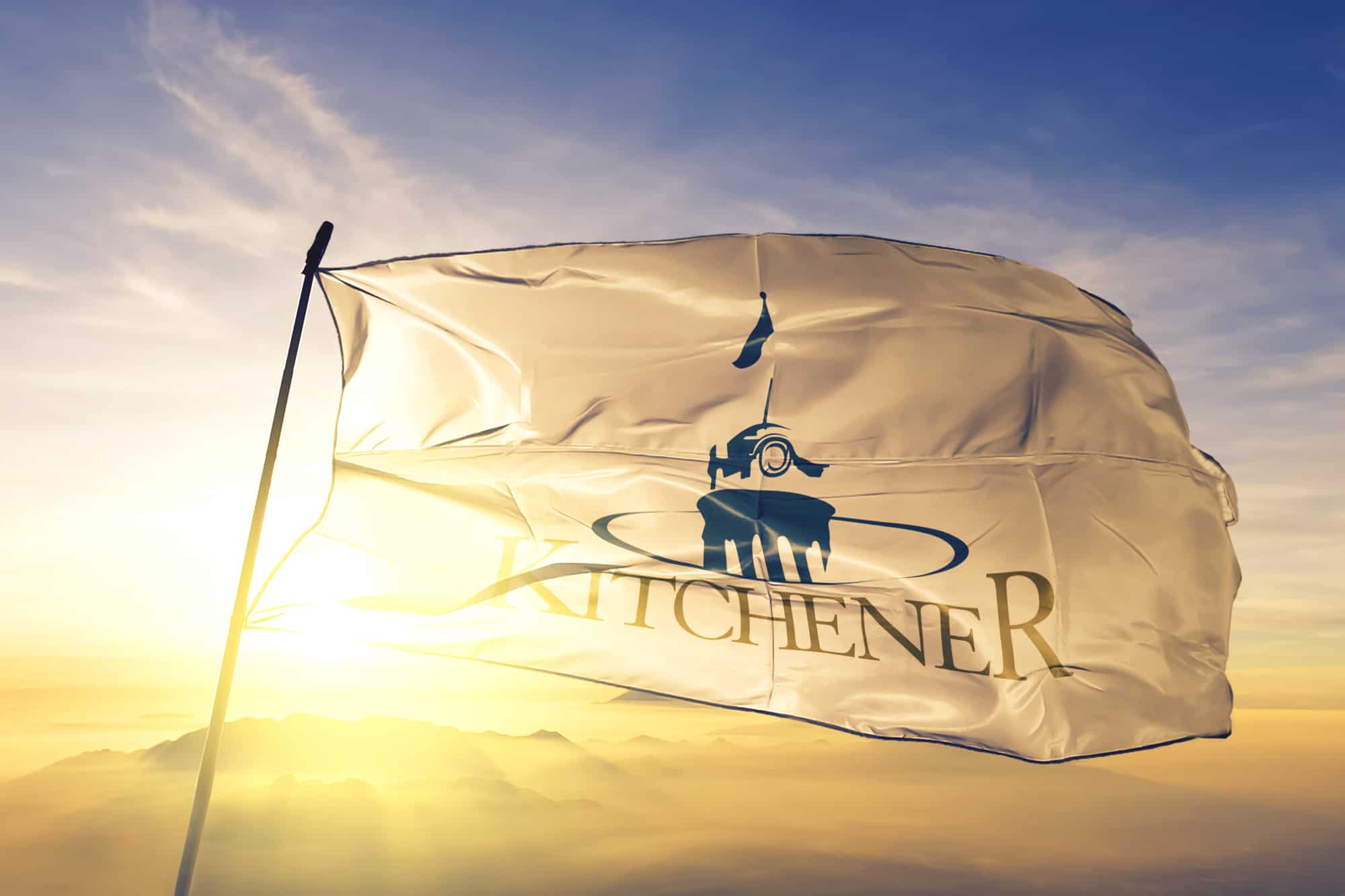 Kitchener is home to 242,368 people and is the twin city of Waterloo. It has a strong German heritage and was called Berlin until 1916. Many of the city’s residents find employment in manufacturing. The top employers in the city include Research in Motion, Manulife, Sunlife Financial and Toyota Manufacturing.

Looking at the average house price in Kitchener, the highest on this list, one might wonder how the city made its way onto the list of cheapest places in Canada. After all, the average house price in Kitchener is close to the million mark. However, since the comparison is based on a range of factors including the price of groceries and the tax rates, it is still a cheap place to live. Working in Kitchener will earn you between 30,500 and 538,000 on average, depending on the employment sector and experience.

Between Kitchener and its twin city Waterloo, you will find a plethora of things to do from sports to arts and restaurants to shopping. Kitchener also benefits from its proximity to Toronto with many people choosing to live in Kitchener and commute to Toronto for work.

Unlike its namesake in the United Kingdom, London, Ontario is a cheap place to live. The average price for a family home is quite high and the average salary is low, but considering other living costs, it is a reasonably cheap place to live in. The annual salaries in London range from 24,800 to 438,000.

London is the home for 404,699 residents and is the regional centre for healthcare and education. Two of the biggest employers in the city are the Western University and TD Canada Trust. In the past London’s economy was focused on manufacturing but is now oriented more towards IT and research, in particular healthcare research.

London is a growing city and attracts families, retirees and young professionals alike. The city is known as the Forest City for all the outdoor amenities available for residents. London is also an important centre for post-secondary education, with five university options and a multi-campus college. 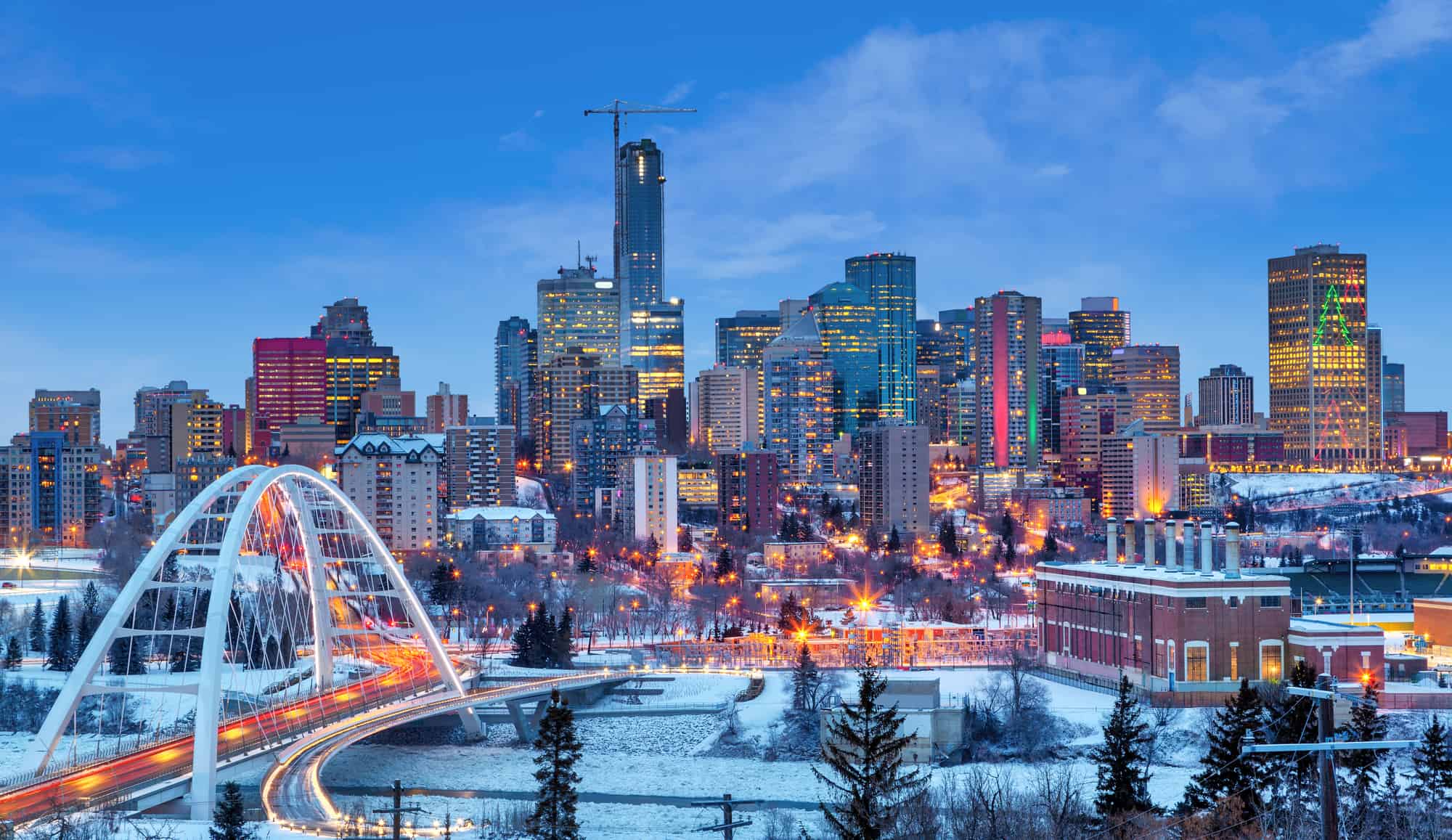 Initial figures can certainly sometimes be misleading, especially if looking only at the average house price and salary in Edmonton. You would think that with the average salary being 125,000 and the house price only 417,000 the city would place a lot higher on the list. However, Edmonton has higher average living costs than other cities on the list.

Edmonton is the capital of Alberta and has a population of 981,280 people. Many of the residents find employment in the oil and gas industry, in the financial sector or in education. The salaries in the city range from 31,600 to 558,000. The oil and gas industry attracts many migrant workers and as a result the city is ethnically very diverse. More than 25% of the population state they belong to a ”visible minority” of mainly Asian ethnicities.

Edmonton hosts a variety of festivals and has been nicknamed the festival city of Canada. One of these festivals is the Edmonton Internation Fringe Festival, which is the second biggest of its kind after Edinburgh Fringe Festival in Scotland and the biggest fringe festival in North America.