If you are considering moving to Ontario, there are many important aspects to consider. You might look at education, healthcare, commutability and recreational opportunities. For many, one of the most important factors is money. Can you actually afford to live in the area?

To determine the cheapest places to live in, we need to look at the cost of buying or renting, groceries, transport, healthcare, energy, clothing and, for families, childcare. That means a lot of research.

Alternatively, we could look at the cost-of-living index and save ourselves a lot of time.

What is the cost-of-living index?

A cost-of-living index compares the cost of living in different areas. It helps you to work out how far your salary will go in different parts of the country.

For example, if you move from Toronto where the cost-of-living index is 74.17 to Windsor where it is 66.11, your money will go a lot further. However, if you move the other way, without an increase in your income, your salary will not go as far.

The cost-of-living index considers an array of costs, including:

In order to compare areas, we need a baseline. Usually, the baseline is represented by 100. A place that would score 125 would therefore be 25% more expensive that the baseline, whereas an index of 85 means the place is 15% cheaper.

Employers and governments use the cost-of-living index to determine wages or make adjustments to taxes and benefits.

So what are the cheapest places to live in Ontario based on the cost-of-living index? 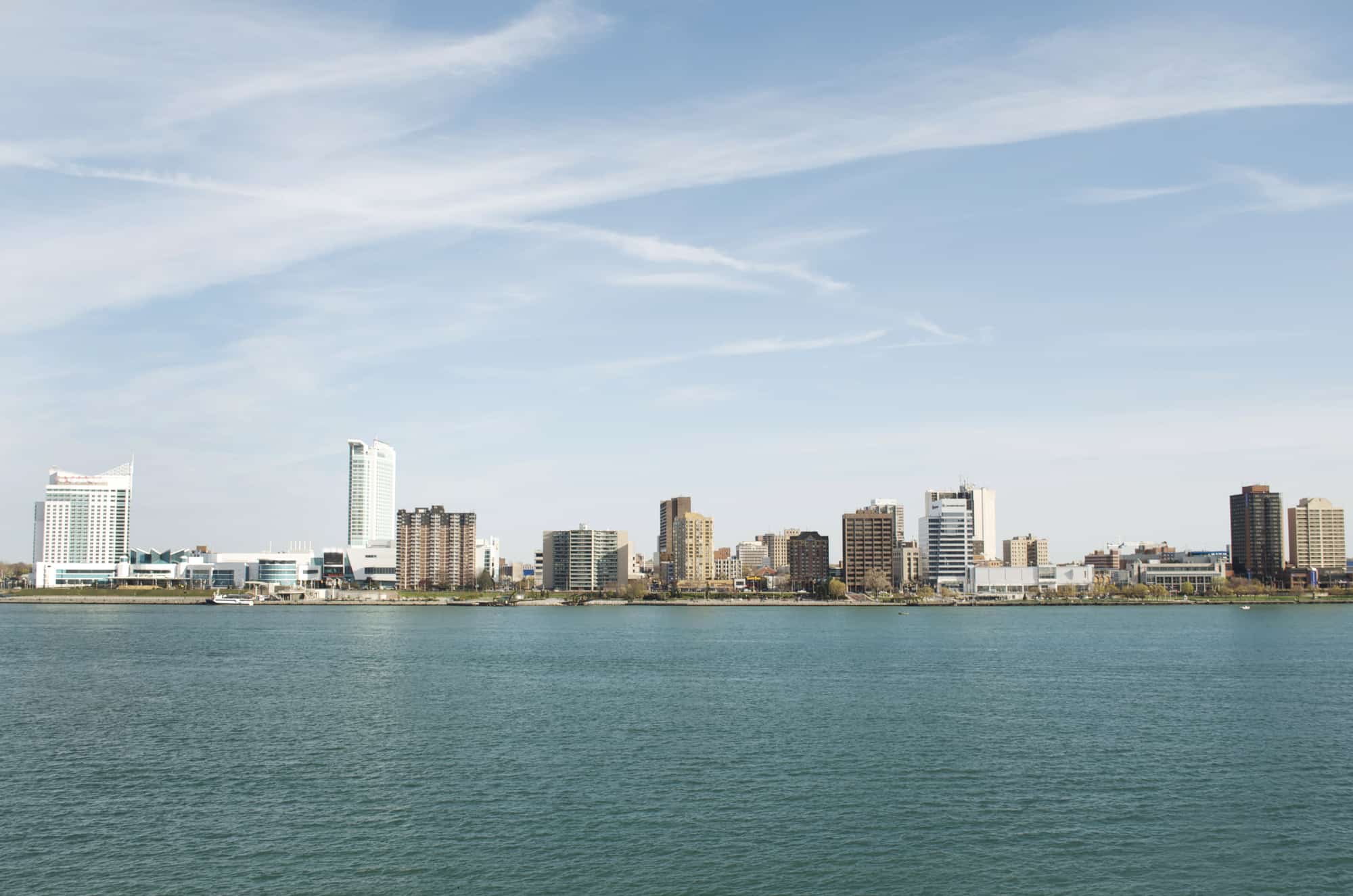 Windsor is the cheapest place to live in Canada, with a cost-of-living index of 66.11. It is a growing border city and only a ten-minute drive from Detroit. The city has a diverse population which is reflected in the city’s cultural and culinary offering.

Windsor has great connections, including its own airport with mostly domestic flights. Those wishing to fly to further destinations can use the airport in Detroit, or you can take a shuttle bus to London, Hamilton or Toronto and use the airports in those cities. Travelling from Windsor really couldn’t be more convenient.

One issue with living in Windsor is the local job market. The unemployment rate in the city is high. However, the city is working hard to fix this problem by creating new jobs. And of course, there is the option of commuting across the border to work in Detroit.

Next on the list of the cheapest places to live in Ontario comes Brampton with an index of 67.45. The city benefits from being less than half an hour from Toronto and is a popular choice for people working in Toronto but looking for a more affordable home. Brampton is also less than thirty minutes from Hamilton and less than twenty minutes from Mississauga.

Similarly to Windsor, Brampton also has a high unemployment rate. However, the city has strong sectors such as communications, life sciences and logistics, so there is potential for a healthier job market in the future.

Another issue with Brampton is that it has been a bit of victim of its own popularity. The population of the city has risen by nearly one hundred thousand in under ten years. It has made parts of the city feel overcrowded and has increased traffic congestion. 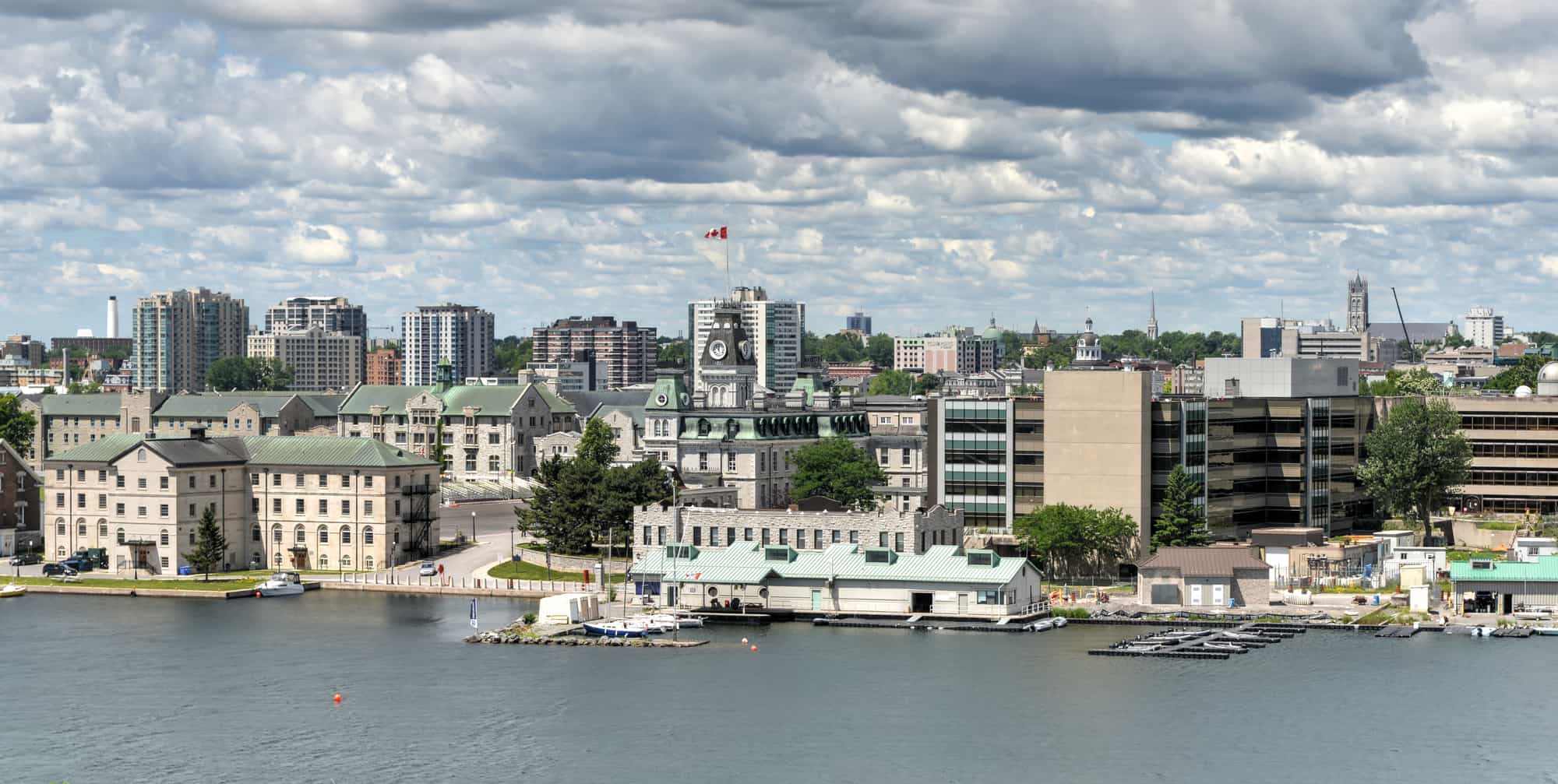 Located on the Lake Ontario, Kingston is a city with beautiful nature and plenty of options for recreational activities. The city is big on sports and whether you want to watch or take part; you are likely to find a sport that interests you. Lake Ontario is great for watersports or you can explore the local hiking trails.

The city is also a cyclist’s paradise. Its wide pavements and many bike lanes mean it is easy to explore the city or to commute to work on a bike.

Kingston has a cost-of-living index of 67.71 despite fairly high rental prices. People are willing to pay more to live near the lake, which pushes the prices up. However, other costs compensate for the high property market, making Kingston a cheap place to live in. For example, public transport, groceries, eating out and car insurance are cheaper in Kingston.

Hamilton, with an index of 68.51, is a popular choice for people leaving Toronto for a cheaper option. The city is in the ”golden horseshoe” which is Canada’s most industrialized and populated area.

The job prospects in the city are good, with the steel industry employing many of the city’s residents. It is a great city for post-secondary education offering several options, including McMaster University with a medical school ranking among the top one hundred in the world. Hamilton has also been named Canada’s best city for hospitals with seven hospitals that are all ranked high worldwide.

Hamilton is famous for its waterfalls and has been referred to as the waterfall capital of the world. These waterfalls attract a lot of tourists to Hamilton. This is great for the tourism industry. However, if you are not a fan of big crowds, the Hamilton might not be the ideal place for you.

Kitchener is in the south-west of Ontario and is between Waterloo and Cambridge. It has good public transport links out of the city, which is a bonus for those who don’t drive. The property prices in Kitchener have been rising each year, especially following the pandemic and increase in remote work options, which saw many people moving from Toronto to cheaper places like Kitchener.

Despite the rising prices on the property front, Kitchener is still a cheap place to live. It comes in at number five with a cost-of-living index of 70.05. Similarly to Kingston, the affordability of other items such as groceries, insurance and public transport, compensate for the housing market.

Kitchener has German roots (it used to be called Berlin until 1916) and together with Waterloo hosts the biggest Oktoberfest outside of Germany. It is also the home for a free blues festival which stages some of the best blues acts in the world. The festival attracts over 150,000 visitors annually, so if you don’t like crowds, you might like to plan a vacation while the festival is on. 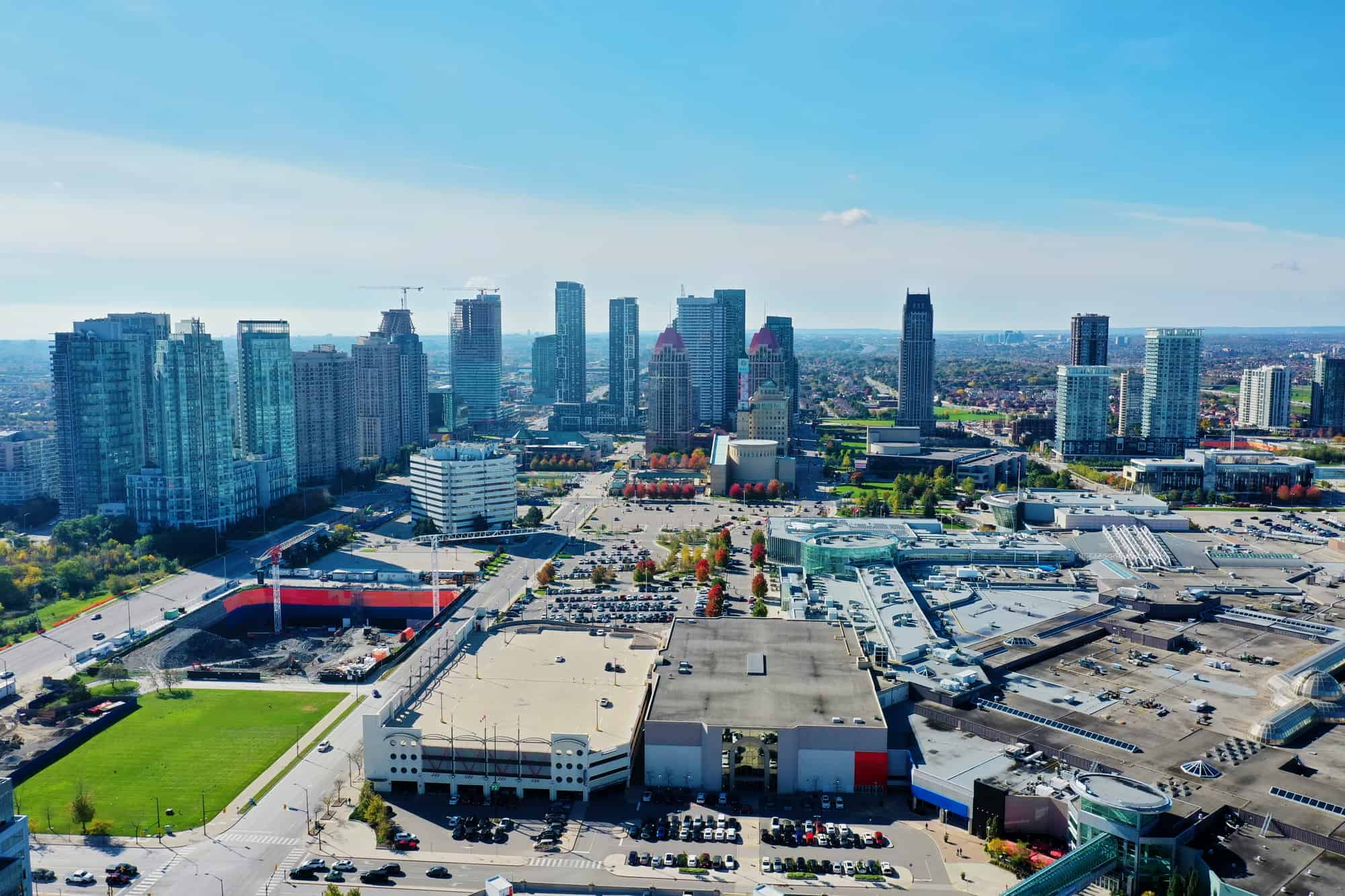 Mississauga has been awarded the title of the best place to live in a survey by ReMAx in 2019. It rated highly for easy access to services, schools, public transport, dining options and availability of green spaces. A cost-of-living index of 70.44 also makes it an affordable place to live.

The city has a healthy job market and the cost for start-up projects is low. Mississauga is a great option for budding entrepreneurs with its business development programs. It is a diverse city and people with roots from all over the world have made it their home. The biggest ethnic groups are Scottish, Irish, Chinese and Indian.

Mississauga is less than a twenty minutes’ drive from Toronto Airport. This has its pros and cons. A pro is the ease of travelling to other parts of Canada or abroad. The con is the noise pollution. Many people might find the noise of the overflying planes too much to get used to.

London is located conveniently between two major cities: Detroit to the west and Toronto to the east. Both are approximately a two-hour drive away from London. It is also just two hours away from Niagara Falls. It is an ideally connected city, making it easy to experience different cultures, landscapes and attractions close to your doorstep.

London has a cost-of-living index of 70.67, which is partly because of lower housing prices. Though the cost of renting and buying has increased in the recent years, its property market is still one of the most affordable in the region.

Similarly to Windsor and Brampton, London’s unemployment rate isn’t ideal at 5.3% (March 2022) but it is not the worst in Ontario. And finding a job in London is by no means impossible, with the number of jobs available remaining steady. Unfortunately, the city also has a growing homeless problem with an estimated thousand people living on the streets. 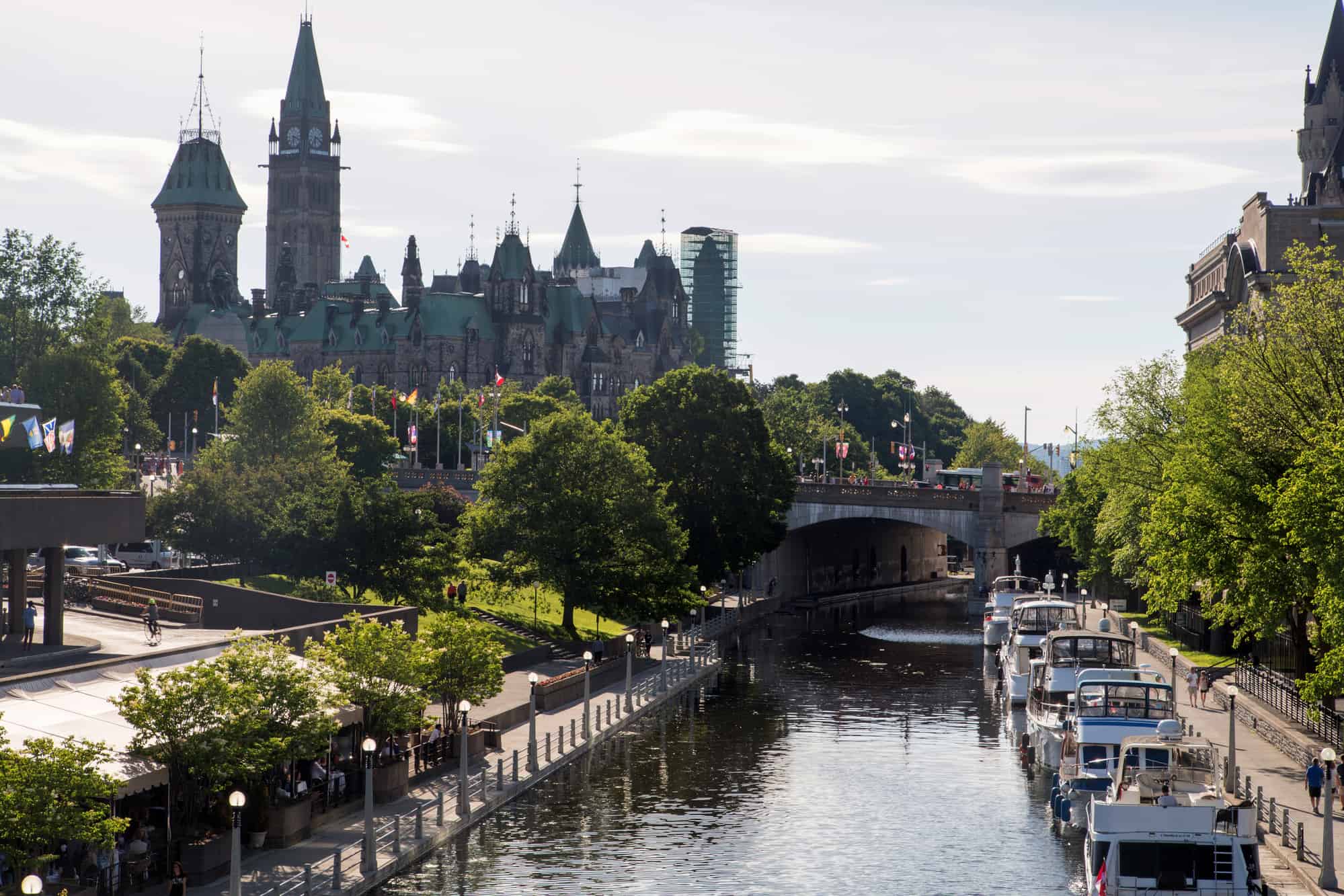 Based on annual crime figures, Ottawa is one of the safest cities in Canada. Majority of the city’s residents report they are happy to walk alone at night. The capital of the country also has a lower unemployment rate compared to the average rate for the whole country.

It is also a very affordable city. The cost-of-living index for Ottawa is 70.73, making it the eight cheapest cities in Ontario. Ottawa is also a great place for post-secondary education and has the highest number of residents per capita to have a PhD. It also has the largest number of scientists and engineers.

For anyone looking for a vibrant city, Ottawa might not be the number one choice. The city places more focus on government business than on tourism and entertainment. However, if you like the sound of living in a safe city with a healthy employment market and not packed with tourists, then Ottawa is a great option.

Markham is the 16th largest city in Canada and a technology hub with thousands of tech companies and industries including Motorola, IBM and Hyundai. With so many employers in the city, there are plenty of job opportunities in Markham.

The city’s cost-of-living index is 71.81. It is a safe place to live with a low crime index. Markham is less than 30 kilometres from Toronto, which opens up even more job opportunities and easy access to an amazing nightlife and additional amenities.

People looking to move to Markham need to know that it is a vehicle-dependent place. There are sidewalks, but they are not that well planned, and the area is very spread out, which makes getting around on foot challenging. 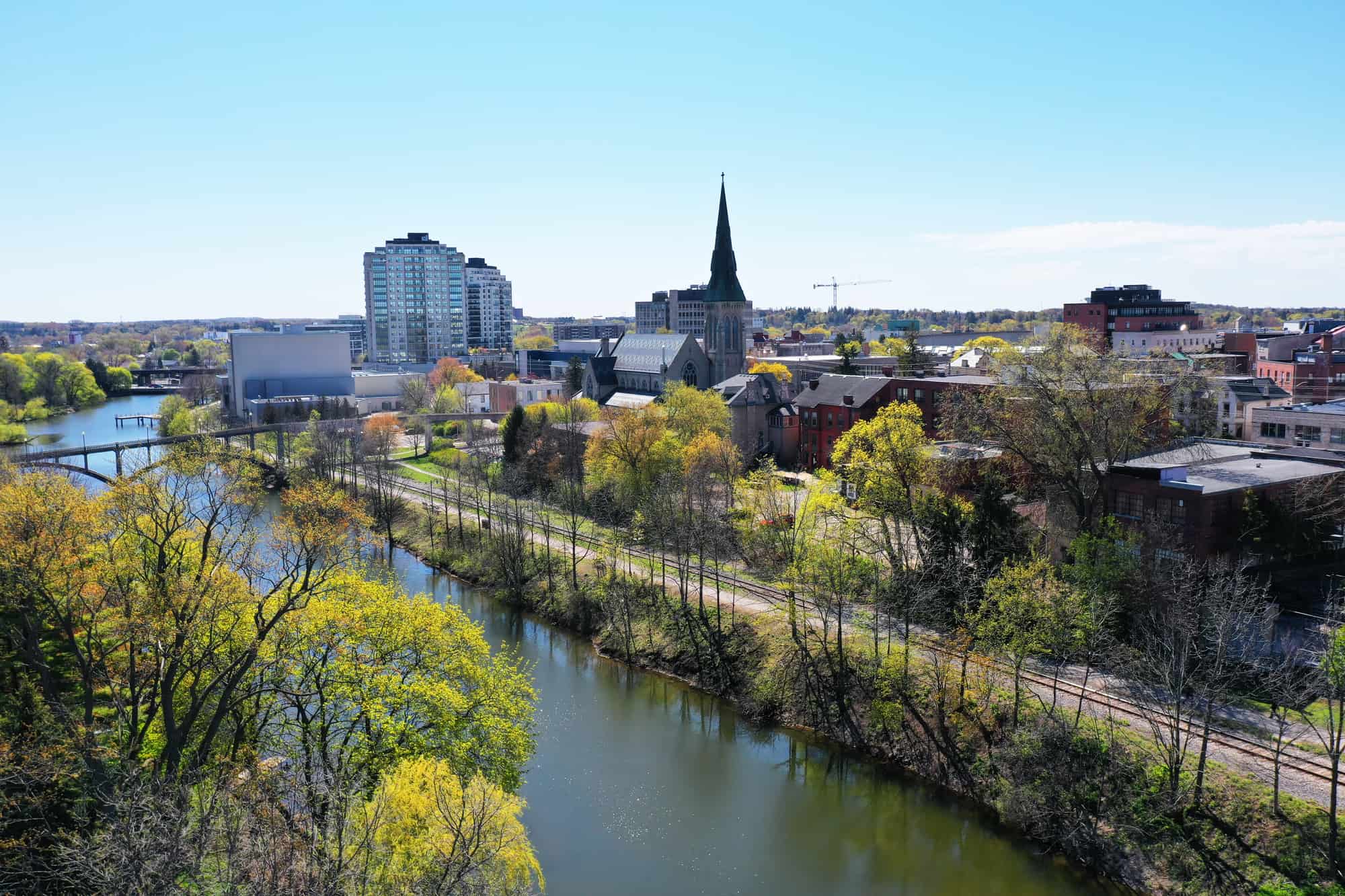 Guelph, the number ten of the list, has a cost-of-living index of 72.76. It is a popular destination for relocating families not only because of the low cost of living but also because of its longstanding trend of being one of the top ten safest cities in Canda.

The city is centrally located with many major cities in the Greater Toronto area within an hour’s drive. It is ideally located for a vast variety of employment opportunities. However, most of the residents choose to work locally and the city has one of the lowest employment rates (under 2%) in the country.

Despite its excellent location, commuters mainly depend on private transportation. The public transport system is quite underdeveloped. However, the Guelph Transit has announced that they will revamp the transit structure to create additional routes and improve access around Guelph and to neighbouring cities.