When people think about living in Canada, Nova Scotia might not be the first province that comes to their mind. It might not be as well known, or as popular, as provinces such as Ontario, Quebec or British Columbia. However, it is worth considering because Nova Scotia is a beautiful place to live.

The name Nova Scotia is Latin for New Scotland. Nova Scotia is a maritime province on the eastern coastline and interestingly, is almost exactly halfway between the North Pole and the equator. The climate in Nova Scotia is a mixture of continental and maritime, which means the winters are cold and wet and the summers warm.

Nova Scotia also has many picturesque fishing villages if city life is not for you. There is plenty of nature to experience in Nova Scotia from coastal cliffs and sandy beaches to rolling green hills and forests inland. But if you are looking to move to Nova Scotia, you are probably keen to know what is the cost of living in the province.

In this article, we look at the cost of living in Nova Scotia and how much you would need to earn to live comfortably in the province. With living comfortably, we mean that your income after tax is enough to cover all the necessities and you still have money for hobbies and entertainment and can save for the future.

What is a livable wage in Nova Scotia? 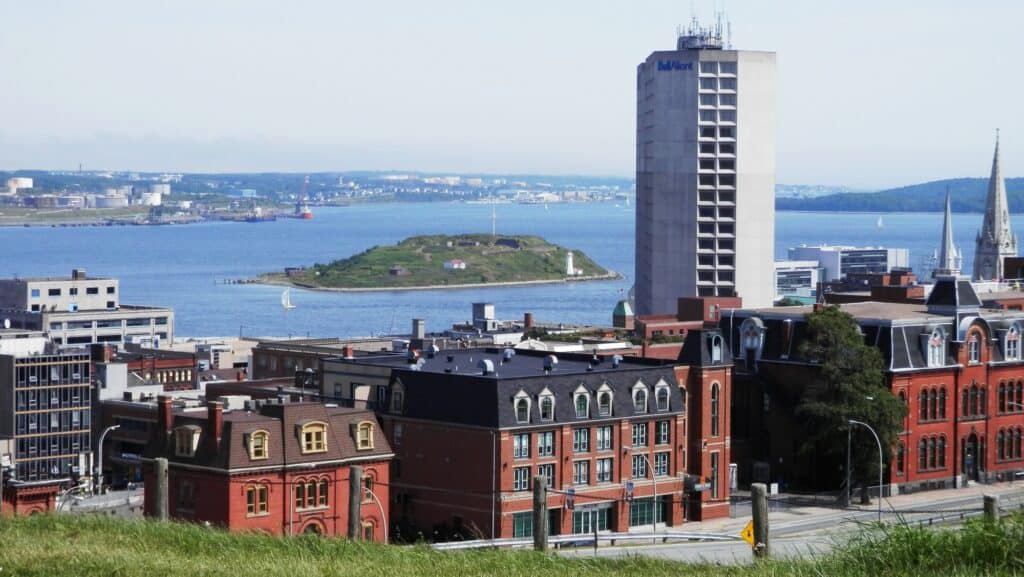 How much you need to earn to live comfortably in Nova Scotia depends on where you live. For example, you need to earn more in Halifax, which is the capital of the province than in smaller places because your expenses in Halifax are greater.

To live comfortably in Nova Scotia, you need to earn between $18.45-22.05, which is less than you need in provinces such as British Columbia or Ontario. If we compare the monthly living cost without rent or mortgage for a family of four in Halifax, $4,361.83 to that of Toronto $4,731.64 and Vancouver $4,643.05 we can see your wages will go further in Halifax than the other two cities. However, your monthly living costs in Halifax are higher than in Montreal where it is $4,242.47.

But as we will see when we look at the cost-of-living index and the local purchasing power towards the end of the article, it is not as simple as comparing the monthly living costs.

But before we look at the cost-of-living index and local purchasing power, we will look at the different things we spend money on, including transport, groceries, recreational activities, household bills and rent or mortgage. But first, we will look at how much income tax you will pay in Nova Scotia.

One of the first things you need to do when you start working out how much money you will need to live comfortably in Nova Scotia is to take away your taxes from your monthly income.

Below you will see the income taxes were in Nova Scotia in 2021.

The above information of income taxes is from the website for the Government of Canada.

Whether you are looking to rent or buy, the cost of accommodation in Canada has risen significantly in the recent years and Nova Scotia is no exception. However, the province is still among the cheapest provinces in the country and Halifax is a lot cheaper than some other major cities.

For example, let’s compare the price of the average family home in Halifax to the same three cities we used above. In Halifax, the average price is $545,000, in Toronto $1.35 million and in Vancouver $1,374,500. From that, we can clearly see how much further your money will go on the housing market in Halifax. However, the price is not that different compared to Montreal where the average house price is $587,415.

If we compare the rental prices of Halifax to those in Toronto and Vancouver, you can expect to pay about 70% less rent in Halifax. Montreal, once again, is only a little more expensive than Halifax.

When you are figuring out your monthly expenses, you need to include the cost of either public or private transport. Unless you walk or cycle everywhere and incur no costs.

Since data for other cities and towns in Nova Scotia is not as available, we will use Halifax as an example again. A single trip on public transport will cost you $2.75 in Halifax and a regular price monthly pass is $82.50. To fill up your own car will cost you $1.97 per litre.

Another expense that needs to be included when working out monthly living costs is your utilities, including electricity, water and rubbish collection. The cost for these utilities combined for an 85m2 apartment is $154.66 per month.

You probably will also have internet at your home which will cost you a further $104.20 per month on average.

The amount you will spend on food per month will depend on your diet and whether you prefer to cook, get take away or to eat out. This is one area where Nova Scotia is dearer than other provinces such as Ontario or Quebec. One reason behind the higher cost is longer and more costly transport and another is the shorter growing season than in the more southern provinces.

Here are some price examples of what you can expect to spend in Halifax.

In this section we have included prices for recreational activities such as going to the cinema, joining a gym or playing tennis for an hour during the weekend.

From the table above, we can see that the prices are very similar across all the four cities.

If you have children, then you also need to account for the cost of childcare. Primary and secondary education are both free in Canada. However, if you wish to enter your child into a private primary school, then you would be looking at $16,000 per year for one child. The monthly cost of a private preschool place based on full day care is $732.22.

Compared to Montreal, preschools are cheaper in Halifax, but private primary schools are more expensive.

The cost-of-living index takes into account the different daily costs such as listed above and the average income to calculate an index, which is then compared to a baseline of one hundred. The further below the base line a country of a city is, the cheaper it is to live in. For Halifax, the index is 75.07.

Nova Scotia is a beautiful place to live with stunning scenery and over 7,000 kilometres of coastline. It is a naturally beautiful province with sea, lakes and forests. The space of life in Nova Scotia, even in its capital Halifax is slower than more populated provinces.

It might not have the highest average salaries in Canada, nor the best purchasing power, but it still has one of the cheapest housing and rental markets in the country. The cost of private education is cheaper, too, than in Ontario or British Columbia, so if you are a parent looking to get your child into a private school, then Nova Scotia is a good option.

We also need to remember that the figures such as the median household income is just that: a median. If you are highly skilled, you can earn above the median income and have more money left in your pocket after all your bills have gone out.