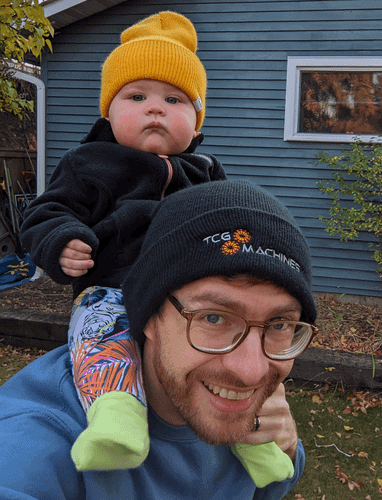 TCG Machines is a Calgary-based technology company that designs, manufactures, and services card sorting machines for the trading card and trading card game (TCG) industry. Though often overlooked, the global market for trading cards in aggregate (combining sports cards with trading card games like Magic: The Gathering and Pokémon) is valued well north of $20B [USD], with somewhere around 100 billion physical cards existing in the world. We’re talkin’ hundreds of thousands of metric tonnes of cards. That’s a lot of cards!

Naturally, keeping track of all of these cards and their rapidly fluctuating prices is a monumental task – something local game store (LGS) businesses are all too familiar with. That’s where TCG Machines and their flagship product, the PhyzBatch-9000 (pronounced “fizz-batch”) card sorting machine, enter the picture. With a mission of providing relief and support to local game stores by supplying them with tools to help them succeed, TCG Machines envisions a future where the headaches associated with buying and selling cards have been eliminated.

I got my bachelor’s degree in Mechanical Engineering from the University of Victoria in British Columbia and then moved out to Calgary, Alberta, in 2011 to work in the oil and gas (O&G) industry. Specifically, I worked in equipment design and automation. I never planned to be in O&G for more than five years, and I was always trying to come up with ideas for a new business venture. In 2015, I injured my knee and wasn’t able to walk for a few days, so I decided to sort through my personal collection of Magic: The Gathering cards. I’ve been an on-again, off-again Magic card player my whole life, so I had a decent-sized collection of cards. It turns out that sorting through cards was a far more laborious undertaking than I had anticipated, and I realized that there must be businesses out there that have the same problem but at scale! I spent the next year tinkering away at designs for a proof-of-concept card sorting machine prototype. In the summer of 2016, I cold-called nearly 200 LGS businesses across Canada and the USA to see if there would be a market for my machine, and the feedback I received was overwhelmingly positive. In September 2016, I started working on TCG Machines full-time, and I have never looked back.

Buy Bitcoin anytime in 2020, and sell anytime in 2021! But from a business-advice perspective, I would warn myself, “Hey, this is going to take WAY longer and be WAY more expensive than you realize.” The engineering mind has a tendency to forecast in anticipation of everything working perfectly. Of course, this never happens in practice, so you need to be conservative in your projections. The flip side of that coin is that you want to present your business in the most positive light; if you’re too conservative, it will be impossible to get funding. Getting a business off the ground is incredibly tough, and there’s no question about it. 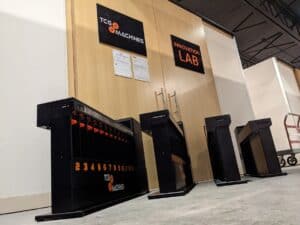 Let’s say you own a game store that buys and sells a lot of trading cards. Over time, you accumulate an impressive inventory of cards, but you may not have an accurate account of exactly what you have in stock. This is a big problem. Individual cards have values ranging from a few cents up to multiple millions of dollars, but if those cards are just sitting in a box on a shelf in your backroom, they’re effectively worthless. How do you tackle this problem? Well, for Magic: The Gathering alone, there are more than 50,000 unique cards (and more released every month!), each with its own fluctuating price. It takes a highly specialized individual with encyclopedic knowledge to look through your cards and pull out the valuable ones, which is to say nothing of how much time it would take to physically sort and electronically catalogue your whole inventory. This sounds like a perfect job for a machine!

TCG Machines produces the PhyzBatch-9000, a machine that scans and recognizes cards using sophisticated computer vision technology and then physically sorts and separates those cards into output bins based on the user’s specifications. Effectively, the PhyzBatch-9000 is a tool that can turn any LGS staffer into a card-sorting superstar! Using a PhyzBatch-9000, a single employee is able to accomplish in a day what would have previously taken them weeks or even months. By keeping an accurate accounting of its inventory, an LGS business gains improved visibility and access to its products, allowing for higher throughput and increased sales.

I am a big nerd, in case that has not yet come across in this interview. As such, I have spent a great deal of time in and around game stores. I have seen many succeed, and I have also seen many fail. It’s a difficult business. What I am hoping to achieve with TCG Machines is a world in which some of the bigger pain points associated with running an LGS business (i.e. scanning, sorting, cataloguing, and listing cards) can be reduced or eliminated. Hopefully, with some of the hardship removed, running a successful LGS will become easier and more shops will flourish. Card games have been a big part of my life, and I want to help the community of card players and LGS businesses grow and thrive. 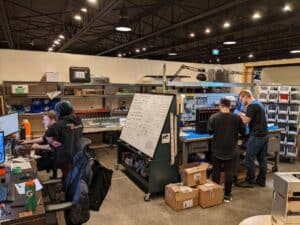 We have a number of magical sauces in our kitchen. Probably the most important (or flavourful? Have we overextended this metaphor?) is the speed with which our machine operates. While commercial competitors do exist, other sorting machines tend to have a best-case scenario top speed of around 500 cards per hour. The PhyzBatch-9000 is able to process more than 10 times that volume of cards in the same period of time. Another tasty sauce which makes our pasta dish so appealing is the novel (and now patent-pending) technique and software we have developed to determine whether or not a card has a “foil” or “holographic” treatment. Foil cards are typically worth substantially more than their non-foil variants, so being able to determine if a card is a foil or not and then price it accordingly is a valuable feature indeed. Currently, this ability is something that only TCG Machines can offer.

Without giving too much away, we plan to expand into the global market. The EU will be our next big push in 2023, but Japan and Australia are also on our radar. We have grown from a company of five employees at the end of 2021 to now having a team of 20 at the end of 2022. In five years’ time, I expect we will be a multi-national company with over 100 employees around the world.

With the continued automation of labour, games and entertainment will compose an increasingly large portion of our global economy. Trading card games and really any face-to-face social games strike me as a great space to invest in for the future.

Certainly, the highest hurdle for us to clear to date was the supply chain crisis of 2021. We pride ourselves on keeping 100 per cent of our design, manufacturing, and assembly right here in Calgary, but there are certain components (mostly small electronics) which cannot be sourced locally. Case in point, our motherboards, which are made in Calgary, are composed of integrated circuit (IC) components from around the world. Sourcing these components would normally have had a turnaround time of a week or two, but instead, it became a multi-month odyssey in which we looked everywhere short of the Dark Web to find suppliers with available stock. This had the knock-on effect of pushing out all of our forecasted delivery times by several months. We have cleared that hurdle now, and we have been producing and delivering our machines with increasing speed for the second half of 2022 to catch up to our extensive backlog of orders.

Check out our website for the latest developments. We are also active on Facebook and YouTube. Please reach out if you have any questions, and we are happy to help 🙂