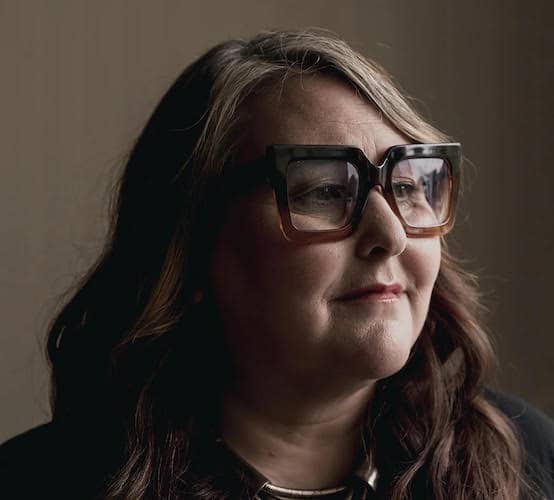 Lumi Foods is a mission-driven company focused on the production of plant-based dairy and alt-dairy alternatives, with a deep focus on cultured vegan cheeses. We are B Corp certified, and believe that the future of a sustainable, just food system needs to move people toward supporting those changes that allow for better practices from soil to table, and include consideration of human wellness and justice issues as well as considering the impact of human activity on other sentient beings.

I’m a chef by trade, a vegan chef, who in 2013 finally had an opportunity to merge my career path (at the time) with my personal ethos. Prior to that, and while I was in university at SFU, I had been planning to pursue an academic path in Bioethics, but eventually veered away from that for so many reasons, (burnout probably one of the top ones!), but I had been working in food and had found that it connected so many things I cared about: bringing people together, demonstrating my version of care/love (it is much easier for me to do this via food/feeding people than in other ways), learning new things continuously, learning a multitude of lessons about myself and people, and the layers of food.

In 2013, when I took on the executive chef role of a vegan restaurant that began my work in making cultured vegan cheese, and searching for methods of making cheese alternatives for my menu that were beyond starch and oil constructions, and this lead me to really focusing on the use of microbes/starter cultures, fermentation, and really learning about how different styles of cheese are made (not just adding flavour to a common base). During my time as a chef, I was invited to write a book about cultured vegan cheese making, which I did, and was published in 2017. The book, The Art of Plant-based Cheesemaking went on to win a Gourmand world cookbook award in its category, and a seconded, extended edition was published last year, and ultimately served as the step-off point for me to transition from being a restaurant chef to focusing on making cultured vegan cheeses as a business.

In 2017 I and my original business partner, Colin Medhurst launched Blue Heron Creamery/cheese, with a small storefront operation on Main St in Vancouver, where we had a micro processing/r&d site from which we also sold cheeses. The launch of the store quickly had us met with far more demand than we had capacity to meet, and this eventually led to connecting with Lawrence Eade, who joined us, and in 2020 we officially incorporated what is now called Lumi Foods, and Blue Heron Cheese remains our legacy cpg brand, as we pursue not only the production of cultured vegan cheeses incorporating a wider range of core ingredients moving away from tropical ingredient reliance, but also the creation of starter cultures as a B2B solution for others in the commercial vegan cheesemaking space.

Oh, my, there are so many things I would say to myself. Know your numbers, review them frequently, focus on building systems early, and trust your instincts…not to the point of ignoring good advice, but, sometimes, even when surrounded by smarter, more knowledgeable people, or people who are quick to share their opinions without asking questions to learn or understand your objectives, you can sometimes doubt yourself, it is important to do a gut check, pause, reflect, and try not to get stuck in doubt.

We focus on producing plant-based dairy and alt-dairy products, starting with a focus on cultured vegan cheeses. The problem we are part of solving? Helping folks transition away from animal dairy, and creating more diversity of cheese types for the plant-based dairy sector.

I’ve been motivated to find ways to build better vegan cheeses (non-starch/oil), primarily because I would love to see people move away from traditional dairy, and find a new tradition!

Early childhood experiences on the farms of family members left me with deep concerns about how humans treat other sentient beings, and though I don’t believe an ethically pure position on anything exists, I do think that we have to ask real questions about human empathy and compassion if we can justify doing the types of things that have been done in the name of commerce.

I also found and still do, that the vegan cheese sector has a lot of room for improvement and growth. There is not a true cohesive craft/approach within the sector, and there is a lack of diversity with respect to the types/styles of cheeses that exists. Traditional dairy has 1000’s, tallegio, gorgonzola, brie, monterary jack, cheddar etc, but the vegan cheese sector is really still nascent, and evolving, and now is the time for methods and approaches to be directed toward really creating better products and diversity of offerings.

Our particular focus on starter cultures (not rejuvelac or probiotic powders), and understanding the relationship between the microbes we use and the core ingredients is where we differentiate ourselves. We focus on developing different styles of cheese, and this means that some of our cheeses will have specific characteristics unique to the style, and not just a different name because we added a different flavour. We have a cheese called Cumulus (we do make 4 versions of this one), and it’s specific characteristics are as unique to it, as the characteristics of a goat’s milk chevre are to that.

Over the next 1-5 years, we are focused on our continued scale up of our cpg and starter culture arms of the business. I would like to see Lumi have achieved widespread cpg presence through North America, and enter the Asian and European markets before/by year 5.

As we are also working on prototypes of animal free cheeses using animal free proteins traditionally found in animal milk, we are anticipating these processes to see us launching a product line geared toward the food service market for cheeses that meet certain desired culinary traits (increased stretchiness, without addition of starch), I’d like to see this line well established.

Likewise, with respect to the starter cultures, I would like to see this side of the business either spun off into a joint venture, or subsidiary and working on developing a robust culture, enzyme and cheese making method system as B2B tools for the vegan/animal free dairy /cheese sector.

Scale up from micro-processing to a new manufacturing facility and everything that came (still) with that. Working in a sector that does not have a comprehensive expertise base the way that traditional animal dairy has, means it is a lot of very intense work to find the right people to do different components of things. Since vegan cheese lacks a cohesive approach, developing manufacturing approach is always a little bespoke.

Finding the right people with openness of mind, willingness to learn brand new to them things, scaling processes that are exponentially larger, encountering the thousand small and large unanticipated things that will occur… have combined to make this one of the biggest learning curves of my life.

We have had to switch gears a couple of times, (global market conditions caused a significant shift on this front, especially with regard to capital raising), and as we move through all of this change, it helps clarify objective, purpose and has helped me to see things in ways that I couldn’t see at the beginning of last year. For instance, making a significant shift to our production model late this spring, a result of coming to terms with some innate challenges of our facility and a need to work with them rather than against them.

How do people get involved/buy into your vision?

We are always interested in connecting with like-minded folks who may want to get involved with our mission and project or work together in other ways. I can be reached best at [email protected] and we welcome everyone to our websites, www.lumifoods.com and www.blueheroncheese.com.